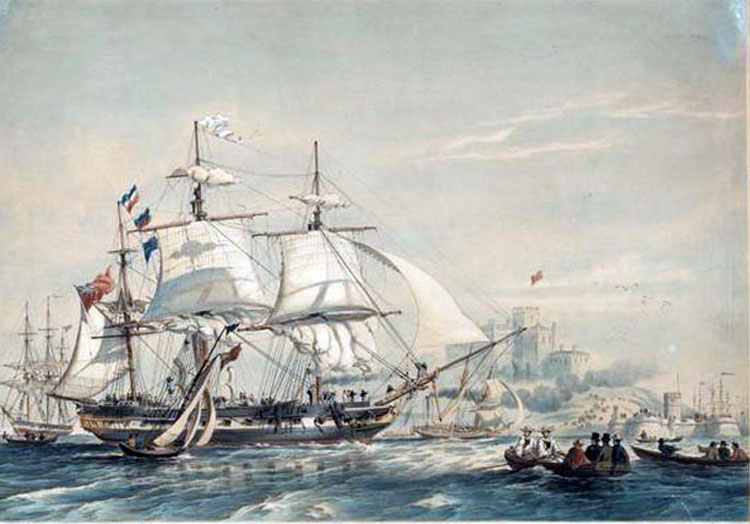 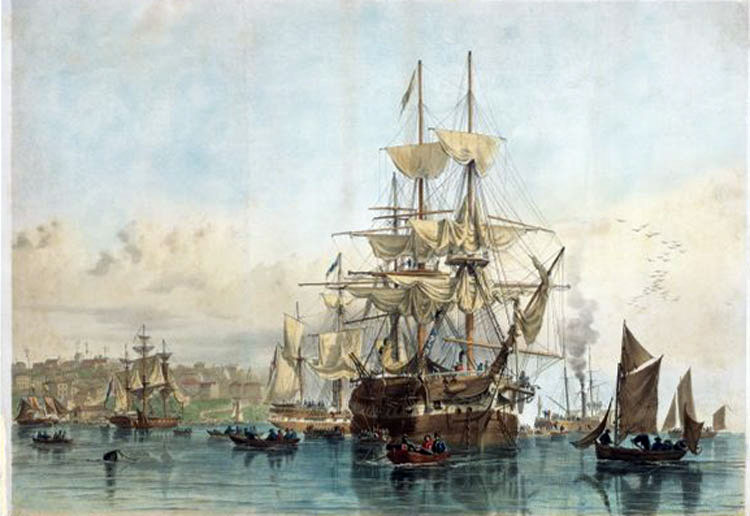 The formula for measuring tonnage was changed by Act of Parliament
and introduced in 1836. Tonnage measured before then was called om
(old measurement) and after that nm (new measurement).  The change
came about because of the changing design of ships.

INDEX OF SHIPPING LINES (AND KEY)

Click on a Key to Enter Picture Galleries
arranged by companies)

CT -  Convict Transports - A Few Indentified Images and
Some Probables

Settlement of Wellington by the New Zealand Company. Historical
gathering of pioneer ships in Port Nicholson, March 8, 1840 - a
reconstruction 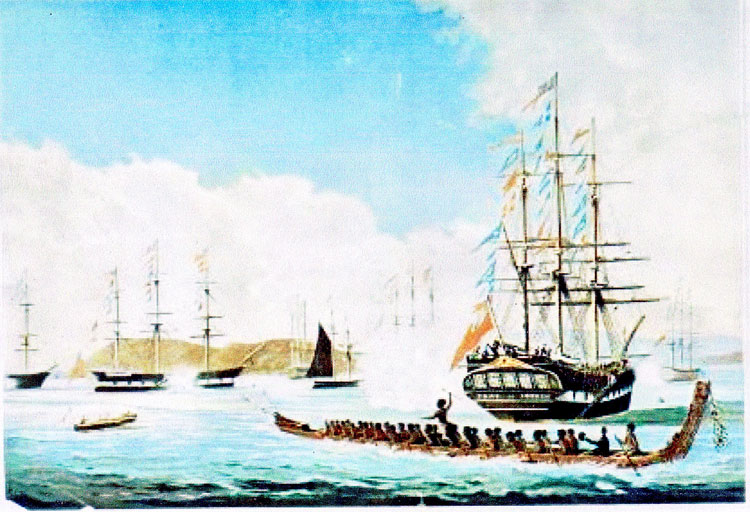 SOURCES (Given under the image on the right hand sidee) 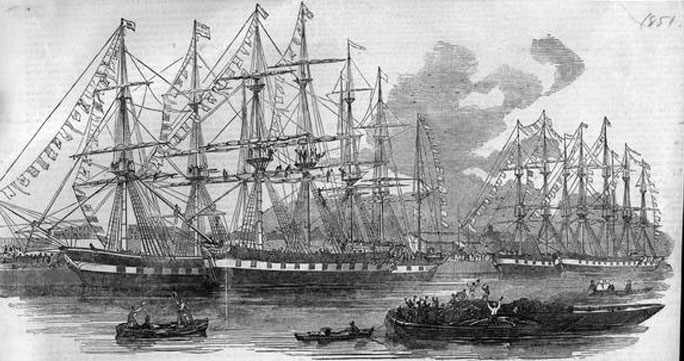 B.  Artists & Photographers (Given where available under the
image on the left hand side)

Red Jacket in Hobsons Bay, Melbourne, 1856-1857
(with the ships James Baines and Lightning) 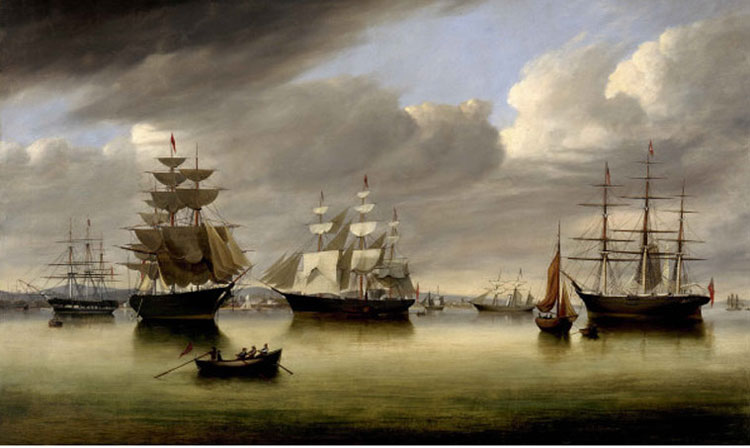 C. BOOKS AND OTHER PUBLICATIONS

Vaughan Evans compiled indexes of illustrations (including ships)
of Australian and New Zealand interest.for each of these publications
These indexes are available on the website of the Australian
National Maritime Museum.. The index for the Illustrated London
News lists illustrations of over fifty sailing vessels from 1845 to 1881.

An oustanding book with colour plates of watercolours by Jack
Spurling of more than seventy well known sailing ships, including
many in the Australian and New Zealand trade, is "SAIL: The
Romance of the Clipper Ships". The book is pictured by Jack
Spurling, storied by Basil Lubbock, and edited by F.A. Hook.
It was published in three volumes in the first instance by the Blue
Peter Publishing Company, London from 1927 to 1936. In 1972,
Grossett & Dunlap, New York, published a facsimile reprint of
the three volumes. A composite volume "The Best of Sail" which
includes thirty-six colour plates of Spurling's paintings was
published by Grossett & Dunlap in 1977.

Basil Lubbock's "The Colonial Clippers", "The Blackwall Frigates"
and "The Last of the Windjammers", Volumes I and II, published
respectively in 1921, 1924, 1927 and 1928, by Brown, Son &
Ferguson, Ltd., Glasgow, and have been reprinted since, contains
photos as well as details of a large number of sailing vessels that
were well known in the Australia and New Zealand trade. The
"Colonial Clippers" contains photos of more than eighty such
sailing ships.

Frank C. Bowen's "The Golden Age of Sail - Indiamen. Packets and
Clipper Ships with Illustrations from Contemporary Engravings and
Paintings in the MacPherson Collection" published in 1925 by Halton
& Truscott Smith Ltd., London and Minton, Balch & Company, New
York, contains black & white and some colour reproductions of
lithographs by T.G. Dutton and J.R. Isaac as well as of paintings in
the MacPherson Collection held by the National Maritime Museum,
Greenwich, in the United Kingdom.

Two other books of New Zealand interest are Alan Bott's "The Sailing
Ships of the New Zealand Shipping Company 1873-1900"
(B T Batsford Ltd, London 1972) and David Savill's "Sail to New
Zealand - The Story of Shaw Savill & Co1858-82" (Robert Hale Ltd,
London 1986).  Both have many pictures of the sailing ships of their
companies in the late nineteenth century.

"American Clipper Ships1833-1858" by Octavius T. Howe and
Frederick C. Matthews (published in two volumes in 1926 and 1927) by
the Marine Research Society, Salem, Massachusetts) is another rich
source of information and pictures.

The American clipper ship prints published by Currier & Ives of
"Red Jacket", "Flying Cloud", "Lightning", and "Sovereign of the
Seas", which carried people to Australia in the Gold Rush in the 1850s,
needs mention. The compilation "Clipper Ships - Currier & Ives Prints
No. 3, introduction by Felix Riesenberg" (published by The Studio
Limited, London and William Edward Rudge, New York , 1932) has
colour reproductions of twenty one of these prints. including the four
clippers mentioned above.

The most difficult task faced by the author was finding pictured
of the ships which brought German emigrants to South Australia
(beginning in the late 1840s) and subsequently to Melbourne, Sydney
and Queensland ports.  The ships of J.C. Godeffroy & Sons, Hamburg,
pioneered this trade and were joined by other German shipping companies.
German steamships are well documented but German sailing ships are not.
Unfortunately the Godeffroy company went into liquidation in 1879 and
images of their ships are hard to find. For an introductory account see
Ronald Parsons’ “Migrant Sailing Ships from Hamburg” (Gould Books,
North Adelaide1993).

The printed catalogues of the National Maritime Museum, Greenwich,
are a central resource in finding pictures of vessels of Australian and
New Zealand interest, in particular, the "Concise Catalogue of Paintings
in the National Maritime Museum", and the Museum's "General
Catalogue of Historic Photographs, Volume II, Merchant Sailing Ships".
Online, the Museum's catalogues of 'Historic Photographs' and 'Prints
and Drawings' are important sources. The latter with its many
thousands of items is an outstanding collection of lithographs, water
colours, etchings and drawings of vessels before they could be recorded
by photography.

By searching the name of a ship in the National Library of Australia's
website Picture Australia, images of the ship can be accessed on screen
from all of the Australian maritme image collections

The National Maritime Museum, Geenwich, remains the premier sourc
of drawings, sketches, etchings, paintings and lithographs of sailing ships
before photography became avaiable in the 1840s.  In photographs of
sailing and other nineteenth century ships, the glass plates of the Thames
photographer Frederick Charles Gould and his son Frederick Samuel
Gould held in Greenwich provide a remarkable record of sail from 1855.

This author owes special thanks to the staff of the Picture Library of the
National Maritime Museum, Greenwich,  for their unfailing help and
cooperative assistance| while this website was being put together.

Apart from the great collections at the Peabody Museum at Salem
Massachusetts, and the Mystic Seaport Museum, the Captain Walter F.
Lee collection of more than 6,000 photographs at the Monterey Museum,
Monterey, California, is of particular interest to Australia and New
Zealand.  Unfortunately, none of this collection is accessible online.
Chase Weaver's "Guide to the Allen Knight and Capt. Walter Lee
Photographic Collections" at Monterey ranks the Lee Collection with
the Malcolm Brodie Collection in Melbourne and the A.D.  Edwards
Collection in Adelaide.

My name is Roy and I live in Sydney Australia.   If you find a mistake
please contact me so that I can correct it.  Or if you know of the
location of an image of a ship that I have missed please let me know
or, if possible, send me a copy of the image by email.  I can be contacted
by email  at:

Queen Charlotte Sound , New Zealand.  A group of Maoris in a
canoe approaching a ship's side. Another ship in the background 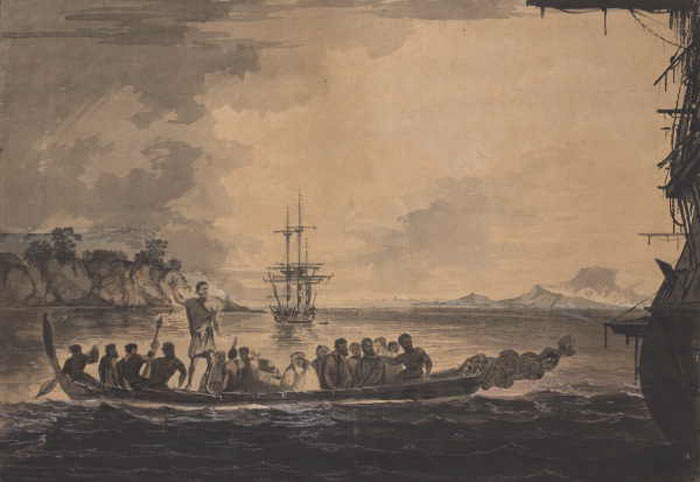